The three sets enabled Dead & Co to legally fit in both a “Help > Slip > Frank” and a “Scar > Fire.” Other highlights include “Eyes of the World,” “Estimated Prophet,” “Sugaree,” and so many more.

Before the clock struck midnight, Garcia’s daughter Trixie Garcia and her half-sister, Ken Kesey’s daughter Sunshine Kesey, flew above the crowd in the arena in a bi-plane. The ladies and flapper dancers on stage were dressed in 1920s attire as they welcomed the 2020s.

Thanks to gabriellynn for the recording! 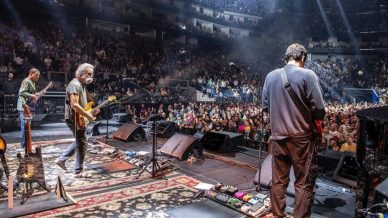