Update: Listen to the full show AUD thanks to cabinet music.

Bobby, John, Billy, Mickey, Oteil and Jeff are back together for Dead and Company’s all too short Fall Fun Run. The 6 gig Fall Fun Run has a pair of night in three venues including MSG, Nassau Coliseum and the Hampton Coliseum.

Despite the couple of months between tours, Dead & Co were off and running last night. Madison Square Garden, the place of countless Dead shows, was home to Dead & Co’s opening night.

Thanks to some familiar names, we have a lot of footage of the highlights from night one of the tour including “Shakedown Street,” “Standing on the Moon,” and the obligatory Halloween cover of Warren Zevon’s “Werewolves of London.”

The night started with Bobby singing “Ripple” in a kilt – yea, it was one of those kind of nights.

Set One:
01 Ripple^
02 Shakedown Street >
03 Bertha
04 Loser
05 They Love Each Other
06 Tennessee Jed
07 Lady With A Fan >Terrapin Station
08 Oteil’s Induction to the Rhythm Devils

Ripple > Shakedown Street (Start at the 5:30 mark)
Playing in the Band

Standing on the Moon


Thanks to Dead and Company, Sean Roche, monihampton, Matt Frazier and Mark Krzos for the footage! 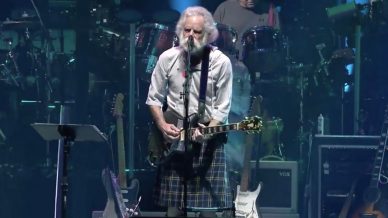