Steal Your Peach, a mashup concept out of Philadelphia, specializes in mashing up the music of the Grateful Dead and Allman Brothers Band. The band rocked the Ardmore on Thursday night for a hometown show and were joined by other east coast natives including Ron Holloway on sax, Danny Mayer(Eric Krasno Band) on guitar and August West.

In addition to Grateful Dead tunes (“Scarlet Begonias,” “Bertha” and “Eyes of the World”) and Allman Brother Band tunes (“Jessica,” “Southbound” and “Whipping Post”), Steal Your Peach also tucked in other classic tunes like Bob Marley’s “Rastaman Chant” and The Band’s “The Weight.”

As he does with every sit in, Ron Holloway on sax added the extra punch that sent tunes like “Bertha” into the stratosphere.

Thanks to Chris Cafiero for the awesome 4k footage and incredible SBD feed! 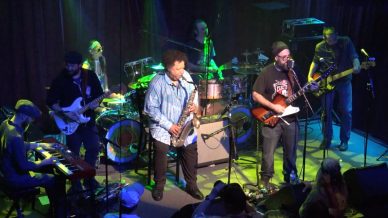