Update: Thanks to Phish Rabbi for the full show AUD!

After the ultimate jam-filled show on Tuesday night, Phish took a much different approach to night five of Baker’s Dozen. The donut of the night was powdered and Phish threw everyone a curve ball with the Fleet Foxes’ “White Winter Hymnal” cover for the opener of the evening. As they had done in the past, Phish sang the tune a cappella and nailed it.

The P-fish kept the first set (and the rest of the show) cover-heavy including “My Soul” and Ween’s “Roses are Free.”

The second set kicked off with a mean but blissful, jam-heavy Carini.

To put the icing on the cake (or the powder on the donut in this case), Phish took the opportunity to pay homage to the donut of the night one more time in the encore. It was hard for me to believe, but their cover of Neil Young’s “Powderfinger” was their first time playing the tune.

It’s hard to believe that Phish can keep these wild, surprise-filled, donut-themed shows going for another eight shows, but if any band can do it, it’s them! 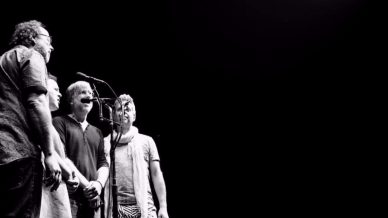