Phish completed their first weekend of the Baker’s Dozen run at MSG and are taking a day of before continuing on Tuesday. The first show was a coconut theme and Saturday’s was strawberry. Phish has announced what kind of donut they will be giving out ahead of the show and the message boards light up with predictions. For the Saturday Strawberry opener, Phish came out and did a great a cappella version of The Beatles’ “Strawberry Fields Forever.”

In the number two slot, Phish played a swingin’ “Halley’s Comet” that got the crowd up on their feet and dancing. The third song and one of the best jams of night, “The Moma Dance” kept everyone up on their feet for the rest of the show. The 17+ minute jam is the kind of thing you would expect to hear in the second set and catapulted the first set into one of the best opening sets of the summer. “Funky Bitch,” “Foam,” “Roggae” and “Squirming Coil” were all highlights of the first set. As Coil came to a close, Mike, Trey and Jon left the stage and all eyes were on Page for a breathtaking keyboard solo to cap an incredible first set.

Phish bursted out of the gate in the second set with a powerful “Down with Disease.” The strawberry theme continued with the debut of “Strawberry Letter 23.” Trey hopped behind the drums on the Marimba Lumina during an awesome jam on “I Always Wanted It This Way.” Phan favorite “Split Open and Melt” kept the second set raging and then Phish busted out the ever elusive “Down with Disease” second jam of the set. I was sitting in the third row behind the band and had an amazing view of the entire floor and stadium. I can testify that the entire crowd went bananas for the second DwD.

After a short by rocking encore that included one of my favorite tunes, “Cities,” Phish bid MSG farewell and closed the book on the second Baker’s Dozen show.

Thanks to Brian V for the recording. 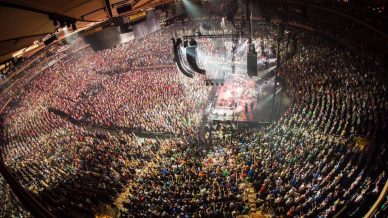