Phish played their second show in as many nights at Northerly Island in Chicago last night. The show is the second of both the tour and their three-night Chicago run.

While last night might have been a little bit of a warm up show, the P-fish brought the goods last night. The entire show was great, but the jaw-dropper of the evening was the epic “Simple” in the second set. The 27+ minute jam is among the longest “Simple” jams Phish has ever performed.

Other notable jams from the show include the “Wingsuit” which you either love or hate, the “More” first set closer, “Cities” and “Slave to the Traffic Light” to close the second set.

Also worth noting that this summer, Phish has ditched the LED backing board and returned to the classic lights setup. Chris Kuroda, commonly referred to as the fifth member of the band, has been on point with the lights the last couple of nights. 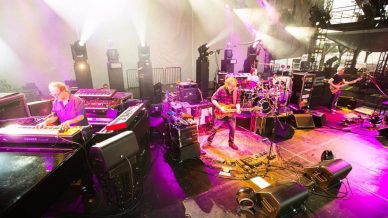