Update: Thanks to Peter Costello & Eric McRoberts for the SBD/AUD UltraMix recording – it sounds amazing!

JRAD powered on from an amazing performance last night at the Brooklyn Bowl for their fifth show of a six-show run. Joe Russo and the gang had another card up their sleeve to bring the fire again-John Mayer.

Mayer is making these Brooklyn Bowl sit-ins with JRAD a habit. Last year, Mayer sat in during JRAD’s fall run in Brooklyn as well.

The Dead and Company guitarist is in between his solo gigs and the November Dead and Co tour. With just a few weeks before the Dead and Co MSG dates, Johnny Lightning is getting refocused on playing the Dead and what better way to do it than with JRAD?

Mayer’s sit-in started at the end of the first set with one of his signature “Althea” jams and continued into the beginning of the second set with a massive “Jam > Here Comes Sunshine” and a dirty “New Minglewood Blues.” Mayer makes one of the most exciting bands in the land somehow a little more exciting to watch.

After retreating backstage, Mayer came out for the encore which started with the extraordinary Marco Benevento soloing and segued into “Such a Night > Franklin’s Tower.”

Thanks to JRAD for the official stream, TimeZonerTV and monihampton for all the great footage! 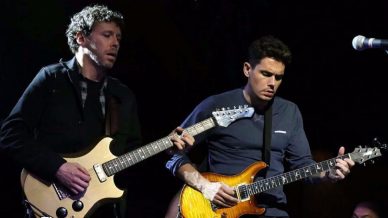