To date, Phish’s summer tour has not been endangered by the coronavirus. Never the less, Trey and the boys felt the need to share some classic Phish while millions of Americans are homebound.

On Monday, Phish announced a new series entitled Dinner and a Movie: An Archival Video Series. The series will dig into the Live Phish archives and feature a full length video every Tuesday evening paired with a recipe. The debut concert in the series was the opening evening to an absolutely stellar run at Dick’s.

The first show during the 2012 Dick’s run had a hidden-gag. The first letters of the songs of this show spelled out “Fuck Your Face” before Fuck Your Face itself was played. In addition to having fun with the setlist, Phish was in fine form delivering jam after jam.

The recipe pairing for the night was Sue and Trey’s “Between Me and My Mouth” Vegetarian Chili.

Thanks to Phish for the great show from the archives! 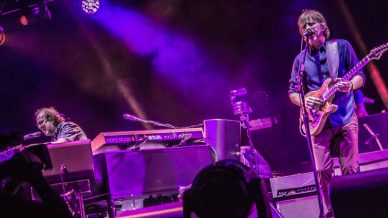