Phish’s first set on paper looks phenomenal, and it really is good. The boys were light on the jamming, because I think they were all excited for the second set treat they were about to serve Nashville.

After a few songs in the second set, Phish welcomed Bobby out for not just one or two songs, but SIX SONGS! Bob Fucking Weir!

They started out by debuting the Dead classic “Samson and Delilah” and then launched into a muddy, jammy 12+ minute “Twist.” The surprise of the sit-in came next with “Miss You,” a song off Phish’s new album Big Boat. The surprise was Bobby was singing! Don’t worry, he flubbed a lot of the verses.

Phish and Bobby went back into the Dead material and busted out “West LA Fadeaway” (383 show gap) and debuted “Playing In the Band” before the “Quinn the Eskimo” encore.

Playin’ In the Band

First Samson And Delilah and First Playin’ In The Band

Thanks to Go See Live Music and TheKamherst for the great video and to Z-man for the recording! 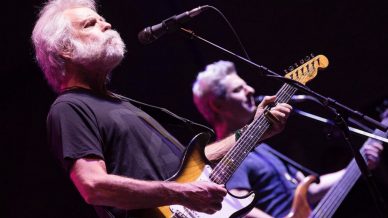