Update: Thanks to Costello and McRoberts for the Ultra Mix!

Joe Russo’s Almost Dead hit the legendary Red Rocks before heading back east for a double-bill at LOCKN’ next weekend.

JRAD’s Red Rocks appearance was filled with cover and teases galore. One of the highlights of the evening was Joe Russo and the gang paying their respects to the recently deceased Queen of Soul, Aretha Franklin during the encore. Russo sang the lyrics to Franklin’s iconic “Respect” during the Dead’s iconic “Franklin’s Tower.”

JRAD also tucked in a Radiohead cover, “The Bends” in the second set, Zeppelin and Skynyrd teases as well as a “Wilson” chant (Phish) during “Slipknot!”

@ – With a MB Solo
# – Ended with a short Playin Jam, in memory of Aretha Franklin
$ – With a DD Solo
% – With Bird Song (TH) and Playin (TH) Teases
^ – With a Born Cross Eyed Tease (Band)
& – With a MB/DD Duo and a long “We’re Gonna Groove” (Led Zeppelin) Jam (Band) that may become its own track
* – Incomplete version of a Phish Cover, crowd sung the chorus, first time Played by Almost Dead
+ – Radiohead cover, not played by Almost Dead since 2017-10-12 Brooklyn Bowl, Brooklyn, NY a gap of 39 shows.
@@ – With a Throwing Stones Jam, and an MB Solo that included an “I Want Candy” (Strangeloves) Jam
## – With numerous teases including “Col. Forbin’s Ascent” (Phish)
$$ – Warren Zevon Cover, MB Vox, not played by Almost Dead since 2017-07-22 Capitol Theater, Port Chester, NY, a gap of 48 shows, with a “Sweet Home Alabama” (Lynyrd Skynyrd) Tease (MB)
%% – With Lyrics from “Respect” (Aretha Franklin), sung by JR and a Shortnin’ Bread” (James Whitcomb Riley) Tease (MB) 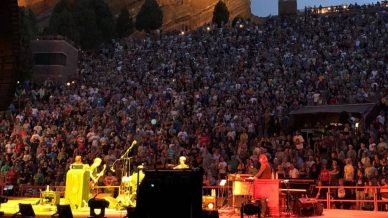