Warren Haynes and Gov’t Mule welcomed a slew of guests for the second night of Warren Haynes’ 30th Annual Christmas Jam. On night one, the Mule transformed into the Dark Side of the Mule. One night two, they treated Asheville to a jam packed night of originals and covers.

After the House PA Revolution which has been the standard for opening Mule shows for the last year, the Mule emerged with Dave Grohl. Grohl, co-founder of Nirvana, Foo Fighters frontman and all-around rock and roll badass was in the Christmas Jam line-up this year. Grohl stuck around and jammed on Neil Young’s “Keep on Rockin’ in the Free World” and Jimi Hendrix’s “Machine Gun.” What a way to open the set!

Dave Grohl is the only other musician in my opinion that could challenge Warren for the hardest working guy in rock. It’s awesome to see their paths cross for such a great cause.

Mike Barns and Captain Ron Holloway, among other guests came out later in the set. 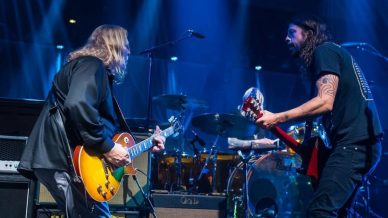