Greenky Bluegrass, one of the juggernauts in the bluegrass scene, casually drops killer covers in nearly all their shows. However, on Casual Wednesdays, GSBG performs an entire cover set. This past Wednesday, they treated Winston-Salem to an entire set of Grateful Dead.

Dobro player Anders Beck opened the second set by explaining exactly what Casual Wednesdays are. In addition to being a GSBG, Anders went on to profess his love for Wednesdays and spread a rallying call for us all to embrace and love Wednesdays. Then without delay, Greensky Bluegrass jumped into a delicious set of bluegrass flavored Dead, starting with “Eyes of the World.”

GSBG marched on with a soulful “Black Muddy River” before dialing it back up on “Mr. Charlie.” The set also included “Friend of the Devil,” “China Cat Sunflower > I Know You Rider” and a huge “Cassidy” sandwich complete with healthy helpings of “Cryptical Envelopment” and “The Other One.” Top the set off with a “Shakedown Street” encore and you have yourself a hell of a Grateful Dead set.

Here’s to many more Casual Wednesdays like this one!

Casual Wednesday, Eyes of the World, Black Muddy River, Mr. Charlie, Friend Of The Devil, China Cat Sunflower > I Know You Rider, Cassidy (2) > Cryptical Envelopment > The Other One > Cassidy

(2) Dark Star and various other Dead teases to start

Thanks to Marisa Muldoon for the stream. 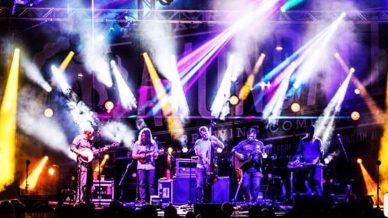