Dead and Company completed their terrific summer tour last night at Wrigley Field in Chicago. After an incredible show the night before, it was hard to imagine them topping the performance. I’ll let you be the judge of how the show stacked up.

Oteil graced Wrigley with lead vocals on “Ship of Fools.” Mayer started out and let Oteil take over the vocals much to the delight of the audience.

Next, Dead and Co reprised the acoustic Dark Star they debuted a couple of weeks ago at Fenway. The gorgeous acoustic version gave way to “Friend of the Devil” before Dead and Co switched from acoustic to electric for an “Althea” for the ages.

The second set kicked off with a “Sugar Magnolia” and delivered hit after hit including “Dancing in the Streets,” “Scar>Fire,” “The Other One,” a hauntingly beautiful “Days Between” into a fitting “Not Fade Away” to end the second set.

Bobby and company came out for one final “Brokedown Palace” and then passed on the “Playin’ in the Band” reprise to pick up where they started the second set—”Sunshine Daydream (Sugar Magnolia Reprise).”

What a show! What a tour! What a band!

Here’s hoping for a fall tour! 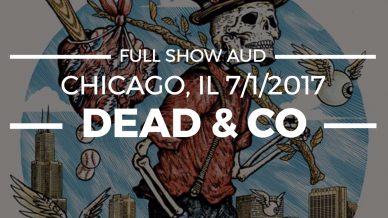 Jam Date: July 1, 2017
Featuring: Dead and Company
Venue: Wrigley Field
Songs: Althea, Brokedown Palace, Casey Jones, Cold Rain and Snow, Comes a Time, Dancing In The Streets, Dark Star, Days Between, Drums, Fire On The Mountain, Friend Of The Devil, Jack Straw, Not Fade Away, Playing in the Band, Scarlet Begonias, Ship of Fools, Space, Sugar Magnolia, Sunshine Daydream, Tennessee Jed, The Other One
Hey-I got something to say!