Holly Bowling returned to YouTube for another stunning Wilderness Session. Bowling, best known for her breathtaking interpretations of Phish and Grateful Dead songs on the piano has taken her act on the road. Well, actually teh road less traveled.

Holly’s latest stop is Yosemite National Park in Northern California. Fortunately Holly was able to visit the park before the wild fires have temporarily shrouded the pristine landscape in an orange haze.

Bowling did a beautiful write-up on her experience filing in the park in the notes of the YouTube video.

Yosemite is one of my favorite places on earth. The massiveness of the stone monoliths and the scale of it all always makes me feel small, in the best way. It’s an immediate and unavoidable visceral sense that humanity is a blip in the timeline of the world and your life is an even tinier drop in that ocean and all the things that feel insurmountable and devastating right now are in truth nothing compared to what’s already happened and what’s to come. It’s also usually crawling with people this time of year – tourists, climbers, hikers, and busloads of visitors from all over the world, selfie sticks in hand. This time, with the campgrounds closed and entrance restricted, there were only a handful of people dotting the landscape. It’s a setting that would’ve been impossible to play in normal times.

There are challenges to playing outdoors in a National Park – drones are forbidden, conditions are capricious and mercurial, and even in the middle of a pandemic where few people are allowed entrance into the park, there is still less solitude than in the far-flung little-known places to come. The desire for isolation and avoiding curious onlookers stumbling across the stream and into camera view made this the shortest of the sets, and the huge overhead shots that give a wide open perspective and panoramic sense of the space are missing. But the intensity of Yosemite more than makes up for these limitations. It’s such a special place, I still can’t believe I got to play music there.

Each one of the locations for the Wilderness Sessions came with its own set of difficulties and each time we had to figure it all out anew. But each site also brings something of its own to the music, often surprising me in the moment. In Yosemite, the wind moving through the huge spaces carved out of the granite by time and glaciers is one of the sounds that stays with me every time I leave, and you can occasionally hear shadows of it in the recording. The wind brushed up against the strings of the lap harp and left a faint halo of sound in its wake. Other times, it screamed over the harp’s sound hole, ushering in an array of sounds outside my choosing that shaped the direction of the set: nature’s take on chance music. Sometimes I loved the effect; sometimes it threatened to spiral out of my control and lead the set astray. As the sessions continued and I became more comfortable playing in these wild, unruly outdoor settings, I started awaiting these moments and looking to them for inspiration instead of trying to control them or work around them. The sets get longer as the tour continues. This is all part of the arc.

Yosemite is a place I go to search for grounding. It’s a place anchored in granite and still loosely tethered to the place I call home. I think I was still looking for that here. This is the last set where I clung to that line – the last set before the leap into the unknown.

Thanks to Holly Bowling for the wonderful footage. 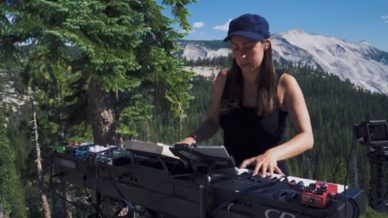