Warren Haynes announced a pair of socially distanced shows, his first since the COVID shutdown for this weekend at South Farms in Morris, CT. The two shows sold out in no time and Warren quickly announced more for October.

The shows feature Warren with support from Gov’t Mule keyboardist Danny Louis. To say it was incredible to see Warren back on stage would be an understatement. Warren treated the fans on the farm to 20 songs over two sets and an encore. The show featured some of Warren’s favorite covers such as Neil Young’s “Cortez the Killer” and Leonard Cohen’s “Hallelujah.”

Thankfully Sean Roche was in attendance and a couple of tapers including johnt569. Sean got some great footage of the “Cortez the Killer” encore and “Scared to Live > Hallelujah.”

*Dedicated to Toots Hibbert
#Short version due to time limit.

Thanks to johnt569 for the recording. 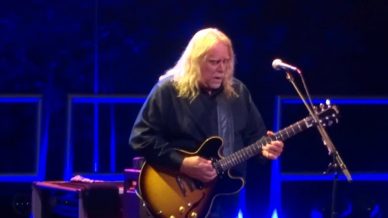