For our next stop on the We Will Get By Streaming Tour, we head back to July 8th, 1981. After the Dead played in Austin on the 4th, they headed north and landed in St. Louis at the Kiel Auditorium a few days later.

This recording from the Kiel Auditorium is our first AUD of the tour as there isn’t a known soundboard recording from the show in circulation. Don’t let the AUD fool you—this is a phenomenal recording! Check out the set 1 ending “China > Rider” and the set 2 opening “Scar > Fire.”

Thanks to Matthew Vernon for the recording. 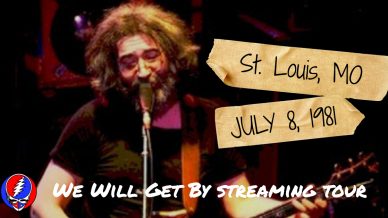