Our next stop on the We Will Get By Streaming Tour brings us back to the summer of 76. The Grateful Dead continued their six night run at the Orpheum on this day in 1976 with their penultimate show of their run in San Francisco.

This show has many memorable moments, but the standout is the second set “Comes a Time.” The version ranks among the best the Dead have delivered over their 30 year tenure. The extended jam gives way to “Drums” and then the rumble of “The Other One.”

Encore
U.S. Blues, Not Fade Away

Thanks to Jonathan Aizen for the soundboard. 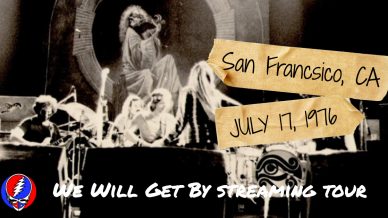