Since being formed in 1994, Gov’t Mule (and more specifically Warren Haynes) has established itself as one of the most consistent road warriors in the rock scene. Last night Mule hit another milestone that cements their legacy—2,000 shows!

It was only fitting that Gov’t Mule’s milestone performance was in Central Park—in the heart of one of their favorite places, New York City. The long-awaited tour opener at Summer Stage included an opening set from Chris Robinson Brotherhood. After CRB, the Mule got down to business and played a monster 18-song set (19 with an encore.) About a third of the songs Mule played were from their upcoming album, “Revolution Come…Revolution Go” due out in June.

In addition to the new tunes (including a pair of concert debuts), Mule welcomed out Bobby Allende, Jasmine Muhammad & Lauren Dawson for some of the material off the new album. Later in the show, Neal Casal and Bruce Willis (yep, the guy from Die Hard) sat in on the blues standard “Key to the Highway.” Frequent collaborator Steve Elson was also on hand to sit in on the last two tunes of the set, “Mule” and “Stratus.”

Thanks to our buddy Sean Roche, we have great front-row footage of nearly half the show.

Rocking Horse > Birth of the Mule 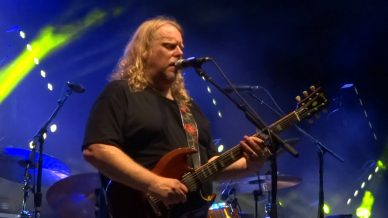