If you ever have heard Grateful Dead classics like “Black-Throated Wind,” “Hell in a Bucket,” “Picasso Moon,” “Mexicali Blues,” “I Need a Miracle,” “Estimated Prophet,” or “Looks Like Rain” you have heard some of John Perry Barlow’s lyrics. Grateful Dead lyrics are just one item on Barlow’s resume which also includes Wyoming cattle rancher, a Fellow at Harvard Law School’s Berkman Center for Internet & Society and co-founder of the Electronic Frontier Foundation.

Barlow, in serious medical condition, is in need of financial support to pay his medical bills. Promoter and Brooklyn Bowl founder, Peter Shapiro organized an all-star concert to celebrate Barlow’s contribution to the Grateful Dead legacy and raise money for his medical costs.

The Terrapin Family Band served as the evening’s house band with an ever rotating cast of guests.

Here is the setlist:

Thanks to Eric McRoberts for the soundboard matrix great recording. 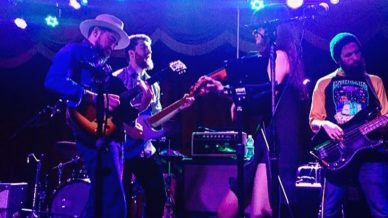