Living guitar legend Jimmy Herring has a new band called The Invisible Whip and they embarked on their first tour last week. In addition to being listed as a founding member of The Aquarium Rescue Unit, Project Z, and Jazz is Dead, Herring has also played with Allman Brothers Band, Phil Lesh and Friends and is currently sitting in the lead guitarist role of Widespread Panic. Not too shabby.

The Invisible Whip is composed of longtime friends and collaborators of Jimmy including drummer Jeff Sipe (aka Apt Q258), Matt Slocum on B3 organ and clavinet, bassist Kevin Scott and multi-instrumentalist Jason Crosby on Fender Rhodes, piano and violin. As soon as you hear the opening tune, you’ll understand why they are called the Invisible Whip—the band is extremely tight and provides a lush foundation for Jimmy and the other members of the band to improvise on. I immediately thought of the Derek Trucks Band and Soulive when I heard the first songs of the set, but then after listening to the beautiful “Jungle Book Serenade,” I heard how this band could really come into their own.

Jimmy treated Chattanooga to a blistering cover of the Allman Brothers’ classic “Les Brers.” The tune fit nicely into the cadence of the set and it was fun to hear Jimmy open up on the familiar tune.

Herring and The Invisible Whip went from funk, to jazz, to a serenade, to classic rock and so much more. This is going to be a fun band to follow!

Thanks to john m for the recording. 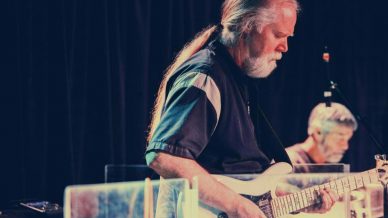