The 7th annual LOCKN’ kicked off a week ago today. One of the dozens of acts I was looking forward to seeing the most was Neal Casal’s group, Circles Around the Sun.

Originally commissioned by the Grateful Dead to create set interludes for their 50th anniversary shows a few summers ago, Circles Around the Sun’s hypnotic grooves quickly found a fan base. They subsequently released two albums and toured sporadically since making their performance debut at LOCKN’ 2016.

CATS returned to LOCKN’ and filled the coveted Garcia’s Forest slot on Thursday evening (Friday morning.) I managed to make it for the first half of the set and was blown away. Neal Casal’s soloing during “Gilbert’s Groove” was straight fire and just what the doctor ordered after a long day.

As I trudged down the path back to my camp site, Peter Shapiro was racing a golf cart towards Garcia’s Forest with Joe Russo and Tom Hamilton from Joe Russo’s Almost Dead hanging out the back. Upon arrival, Russo hopped behind the drum kit for 20+ minutes of jamming to end the set.

This was sadly Circles Around the Sun’s last performance with Neal Casal. He died at the all too young age of 50 on August 26, 2019—just four days after this incredible performance. Rest easy, Neal.

Thanks to Brian from Deadheadland Films for the footage!

If you missed my coverage of LOCKN’, check out all the action from Thursday here. 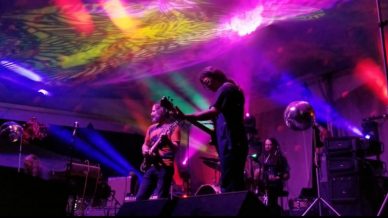