Bob Weir and Wolf Bros had a break in their tour earlier this week while passing through NYC. With 24 hours notice, the band announced a pair of shows at the legendary Blue Note Jazz Club in NYC. The tiny jazz club hosted Weir, Lane and Was for an early set and a late set which were technically two shows.

Weir opened the first set with an intricate “Dark Star” that was woven through nearly the entire set. Kenny Brooks joined Weir and the Wolf Bros for a few of the tunes as well in the first set.

Kenny Brooks returned for the second set as well.

Early Set:  Dark Star, Fever, Easy to Slip, Playing in the Band, When I Paint My Masterpiece
Encore:  Ripple

Thanks to Johnnie Furthur for the stream! 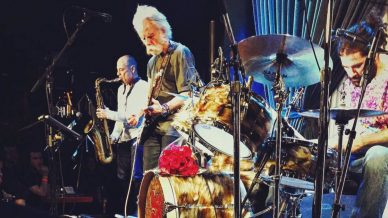