Robert Plant, 69-years young, is on the road with the Sensational Shape Shifters for a tour dubbed Carry Fire. The sold-out tour makes stops in NYC on Valentine’s Day, and starts marching west after a stop in Boston later this week.

Those expecting to be treated to tunes like “Stairway to Heaven” might be disappointed, albeit Plant does share some Zeppelin tunes. The iconic lead singer for Led Zeppelin has reinvented himself since his acclaimed collaboration with Alison Krauss/T Bone Burnett, “Raising Sand.” The 2007 album introduced a brand of Americana that echoes the classic sound of Zeppelin, but feels fresh and entirely new for Plant.

The show’s 90 minute set focused on mainly Plant’s original cannon, including classics like “Please Read the Letter.” Robert tucked in a fair amount of covers toward the end of the set including the traditional tune familiar to Zep fans, “Gallows Pole” and Joan Baez’s “Babe, I’m Gonna Leave You.” Plant and the Sensational Shape Shifters ended the the set with one of Zeppelin’s more popular tunes, “Misty Mountain Hop.”

Thanks to Josh Daniel for the footage! 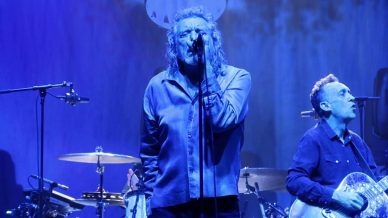