Yesterday was the first day of fall which mean’s it’s time for one of the most anticipated shows of the season—Farm Aid. An institution since 1985, Farm Aid has raised money and awareness about the plight of the modern day farmer and the importance of support local agriculture.

This year’s line-up was basically a beefed-up version of the Outlaw Music Festival and included Willie Nelson, Dave Matthews & Tim Reynolds, John Mellencamp, Sturgill Simpson and Neil Young among others.

While the Farm Aid line-up was stacked, Neil Young’s set was among the most anticipated. At 72 years young, Young’s gigs aren’t as frequent as they were in years past, but he is still as fiery and full of passion as ever.

Neil pulled no punches during his set and shared his feeling about today’s state of farming going as far as to say “corporate farms suck.” Neil pleaded everyone to avoid the non-fresh produce you get at commercial grocery stores and to start shopping at farmer’s market. Young even joked that he is going to tour on a flat-bed truck at farmer’s markets around the country. Now that would be awesome.

Neil’s set was an hour and ranged from vintage tunes like “Heart of Gold” and “Ohio” to newer repertoire. The set ended with an epic “Love and Only Love” with awesome solos from Lukas Nelson and Young. 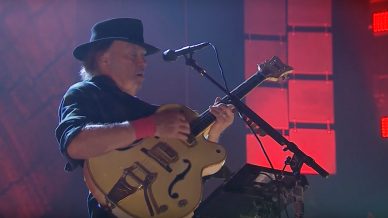 Jam Date: September 22, 2018
Featuring: Neil Young, Promise of the Real
Venue: Xfinity Theater
Songs: Children of Destiny, Field of Opportunity, Heart of Gold, Love And Only Love, Ohio, Powderfinger, Show Me, Tell Me Why
Hey-I got something to say!