Jerry Garcia’s birthday may have been earlier in the week, but the celebration continues, because why not? Last week, Bob Weir did a surprise sit in with John Mayer on his Search for Everything tour stop in Sacramento with a beautiful “Friend of the Devil.” Earlier in the week, Mayer honored Jerry with a “Friend of the Devil” encore at one of his shows.

At the end of Bob Weir and the Campfire Band’s set, Mayer came out for the familiar “Friend of the Devil” which he has already performed a couple of times this week among other tunes. The surprise came when Mayer traded in his acoustic for his electric and launched into “Brokedown Palace.” It was obvious that Bob and Johnny boy are a little rusty playing together, but they do still sound so sweet together. With a quick off-microphone gesture from Weir, Mayer opened up at the end of “Brokedown Palace” and let it rip for a minute or so. The tempo of the Campfire Band is much slower and mood is much more mellow compared to Dead and Company and I don’t think it was quite right for Mayer, but it was still a treat to see him on stage regardless.

Looking forward to hearing more from this one!

Thanks to Kyle Isaac for the great footage! 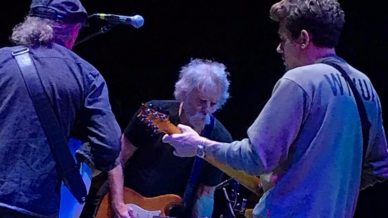