Jerry Garcia would have turned 75 years old on August 1st. Jerry’s birthday, the day he passed away (August 9th) and the “days between” are all sacred days to Dead fans. One of the biggest Jerry fans in the business today is Gov’t Mule frontman and former Dead guitarist& vocalist Warren Haynes. Warren not only played in the Dead for a couple of years in the 2000’s, but has lead several Jerry Garcia Symphonic summer tours and even played Jerry’s famed Tiger guitar in public for the first time since Garcia passed away. So yea, Warren wasn’t going to let 8/1 pass quietly.

Mule recently launched into another leg of their tour to support their new album, Revolution Come… Revolution Go. On Jerry’s birthday, the Mule found themselves at the Jessye Norman Amphitheater in Augusta, GA.

Warren and the Mule opened up with “Patchwork Quilt,” a tune that Haynes penned after hearing about Garcia’s death on August 9th, 1995. Warren was on tour with the Allman Brothers in Jones Beach (as he recalls in the opening lines of the song) with the Black Crowes. Watch Warren recall the night he found out about Jerry’s passing backstage at the ABB show.

After a sobering and soulful opening, Mule continued the Garcia tribute with the epic Grateful Dead tunes “Dark Star” and the soaring “Morning Dew.” For the two Dead covers, Galactic’s Stanton Moore sat in on drums. Gov’t Mule returned to some of their original and more familiar material for the rest of the first half of the set. “Traveling Tune” from the new album kicked off a few other songs from Revolution Come… Revolution Go leading into the second half of the set.

Warren still had Jerry on his mind late in the set and welcomed Stanton Moore back out to reprise “Dark Star.”

The Beatles cover and Jerry Garcia Band favorite, “Dear Prudence” was a fitting encore to a great tribute to Jerry.

Thanks to David Dyche for the excellent recording. 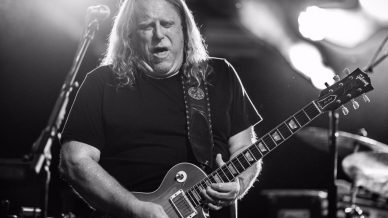