Phish’s New Years Eve shows at Madison Square Garden is among the most anticipated Phish shows of the years. And for good cause. As with their Halloween shows and run at Dick’s in Colorado, Phish always has something special up their sleeves for the three-set New Year’s Eve show.

Phish brought out James Casey on saxophone, Natalie Cressman on trombone and vocals, Jennifer Hartswick on trumpet and vocals, and Andres Forero on percussion to join them for their second set of the night. They launched into one of the more popular numbers off their latest release, “Petrichor,” as dancers in raincoats, suits and umbrellas. It soon became apparent what the umbrellas were for as rain poured down on the stage. The choreographed umbrella dance gave way to the umbrellas floating above the stage like jellyfish.

As “Petrichor” came to a close and Trey started the countdown, it looked like Phish’s gag had been revealed. Then as the boys broke into “Auld Lang Syne,” recorded cat and dog noises broke out in MSG and inflatable cats and dogs rained down on the stadium. It was literally raining cats and dogs!

“Auld Lang Syne” gave way to a jumpin’ “Suzy Greenberg” with Trey, Mike, Page and Jon buried up to their waist in inflatable cats and dogs. Classic.

Thanks to Phish for releasing the pro-footage! 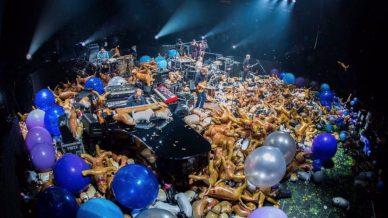