Voodoo Dead got some help from a a couple of NY natives, Brandon “Taz” Niederauer and Leslie Mendelson. Taz, at just 13 years old, has proven to be one of the most formidable guitarists on the scene. Mendelson lent her vocals on four songs including the last two of the night, “In the Midnight Hour” and “Not Fade Away.”

Anytime the night starts out with a 22 minute “Shakedown Street” you know you’re in for a wild ride.

Set 1:
Shakedown Street>
Brown Eyed Women
Loser
Dark Star>
The Other One>
Dark Star
That’s What Love Will Make You Do*
Goin’ Down the Road Feeling Bad*

Set 2:
Eyes Of the World>
Cissy Strut^
So Many Roads
In the Midnight Hour*

E: Not Fade Away*

Thanks to nico11104 for the excellent recording! 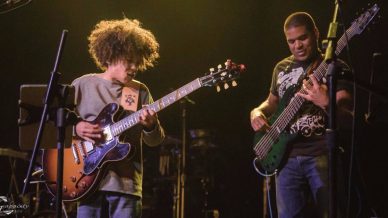