I know it’s January 10th and that we are well into 2017 now, but there’s just too much good music to share from 2016! Jackie Greene finished out the year with a pair of shows at the Mystic Theater in Petaluma before heading to Sacramento for New Year’s Eve. The second show in Petaluma was a scorcher.

Jackie starts the show with a lot of original material before busting out the covers in the second half of the set. From the opening notes of “Dear Mr. Fantasy” to the end of the show are straight fire. After Greene blazes through the Traffic classic, he jumps right into “Scar > Fire” to end the set. For the encore, fans at the Mystic were treated to a pair of Beatles covers, “Tomorrow Never Knows” and “Taxman” with a little “Low Rider” through in, because why not?

Setlist
Back To The Bottom
Till The Light Comes
Now I Can See For Miles
Light Up Your Window
Seven Jealous Sisters
Farewell, So Long, Goodbye
Uphill Mountain
A Moment Of Temporary Color
Spooky Tina
Shaken
Trust Somebody
You Can’t Have Bad Luck All The Time
So Hard To Find My Way
Tell Me Mama, Tell Me Right
Dear Mr. Fantasy
Fire On The Mountain >
Scarlett Begonias

Thanks to zosofan for the awesome recording.

Photo credit: beetseekingmissile (photo is from Karl Denson’s 60th birthday at the Fillmore, but is just too good not to share!) 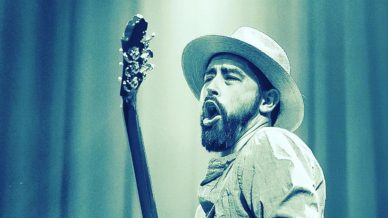 Jam Date: December 30, 2016
Featuring: Jackie Greene
Venue: Mystic Theater
Songs: A Moment of Temporary Color, Back to the Bottom, Dear Mr. Fantasy, Farewell So Long Goodbye, Fire On The Mountain, Hollywood, Light Up Your Window, Low Rider, Now I Can See for Miles, Scarlet Begonias, Seven Jealous Sisters, Shaken, So Hard to Find My Way, Spooky Tina, Taxman, Tell Me Mama Tell Me Right, Till the Light Comes, Tomorrow Never Knows, Trust Somebody, Uphill Mountain, You Can't Have Bad Luck All The Time
Hey-I got something to say!