Gov’t Mule is marching through Europe on their fall tour that is taking the band to undiscovered territory. Last week, Mule played their first ever show in Ireland. Last Friday, the Mule played their debut show in Wales at The Tramshed in Cardiff to a nearly sold-out crowd.

Like in Ireland, Mule made a great first impression in the first set, mixing classic tracks like “Thorazine Shuffle” and “Time to Confess” with future classics off the new album including “Dreams and Songs” and “Stone Cold Rage.”

After educating Cardiff on what the Mule is all about, Warren and the boys treated Whales to some covers in the second set. They kicked off the set with Pink Floyd’s “One of These Days” and teased Jimi Hendrix’s “Machine Gun” during “Blind Man in the Dark” to close the set. For the encore, Warren welcomed the english rocker Bernie Marsden to the stage for a couple of tunes. If you aren’t familiar with Bernie, don’t worry—I had to look him up as well ;). Marsden is best known for his songs we wrote and co-wrote for Whitesnake including the 80s anthem “Here I Go Again.”

Marsden flubbed but then recovered the opening of the Allman Brothers Band “Blue Sky” to end the show.

Thanks to boombox for the recording. 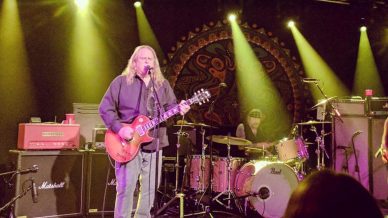