As The Grateful Dead’s 1971 tour rolled into Bill Graham’s legendary Fillmore East on New York’s Lower East Side for five nights from April 25-29, Jerry Garcia And Co. were in fine form. Their week-long residency at the hallowed theater contained a string of memorable moments, the highlight of which came on the third night, when Duane Allman joined the San Francisco jammers for a trio of songs to begin the second set of the night.

By the time the 24 year-old Allman walked on stage for what would be his final time with The Dead, he had all but cemented his place in rock and roll history. Just over a month prior, the defacto leader of The Allman Brothers Band had led his own band through a three night stand on the same stage that would become the Brother’s landmark At Fillmore East album. And that came after having spent part of  the fall and winter of 1970 recording with Eric Clapton’s Derek And The Dominos’ Layla And Other Assorted Love Songs, even leaving the Allman Brothers to play a handful of dates with the band.

Allman, famous for playing with anyone and at any opportunity, shows his incredible diversity by effortlessly adding licks to the Dead’s classic “Sugar Magnolia.” The young guitar master shines even brighter, picking up a slide and taking the lead on a brilliant cover of Elmore James’ “It Hurts Me Too,” before bringing the set opening trifecta in for a landing with an energetic “Beat It On Down The Line.”

Setlist
Bertha, Me & My Uncle, Big Boss Man, Loser, Playin’ In The Band, Hard To Handle, Dark Star-> Wharf Rat, Casey Jones Sugar Magnolia*, It Hurts Me Too*, Beat It On Down The Line*, China Cat Sunflower-> I Know You Rider, Deal, Mama Tried, Good Lovin’-> Drums-> Good Lovin’, Sing Me Back Home, Not Fade Away-> Goin’ Down The Road Feelin’ Bad-> Not Fade Away

Thanks to Johnathan Aizen for the soundboard recording of the show!

The Jam Buzz guest author for this week is Ross Mickel. Ross, aka ‘The Bootlegger’ is the producer and host of Bootleggers Beware, a weekly live music radio show airing from 10AM-1PM EST on The Radiator, 105.9FM in Burlington, VT, and a live music enthusiast, curating a collection of over 2500 recordings. Check out his website and on Facebook. 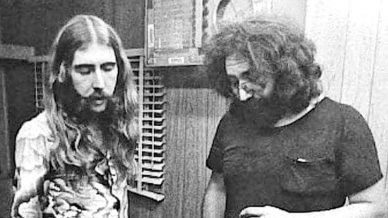 Jam Date: April 26, 1971
Featuring: Duane Allman, Grateful Dead
Venue: Fillmore East
Songs: Beat it on down the line, Bertha, Big Boss Man, Casey Jones, China Cat Sunflower, Dark Star, Deal, Drums, Going Down the Road Feeling Bad, Good Lovin', Hard to Handle, I Know You Rider, It Hurts Me Too, Loser, Mama Tried, Me and My Uncle, Not Fade Away, Playin' In The Band, Sing Me Back Home, Sugar Magnolia, Wharf Rat
Hey-I got something to say!