With the Last Waltz 40 shows behind him, Warren Haynes can focus 100% on getting the Mule Machine into high gear for summer tour to support their new album, “Revolution Come…Revolution Go.” The album will be their 10th studio album release and so far sounds like it’s going to be one of their best in recent years. The songs were recorded in the wake of the election and have an edge to them that reminds me of 90’s Mule.

Gov’t Mule dropped into AOL’s Build Studio in NYC yesterday ahead of their kick-off to their summer tour in Central Park on Wednesday for an interview and an intimate performance of some of the new tunes off of “Revolution Come…Revolution Go.” “Dreams & Songs” is a front-runner in my opinion to be a new Gov’t Mule staple at concerts. The cover of Blind Willie Johnson’s “Dark Was the Night, Cold Was the Ground” rages.

For a couple of the tunes, Gov’t Mule’s four grew to seven with the addition of a percussionist and two vocalists. It will be interesting to see if Mule tours as four or seven this summer.

You can catch the whole interview here courtesy of sgibson818 who was on hand for the performance.

Thanks to BUILD series for the awesome pro-footage of the show and interview! 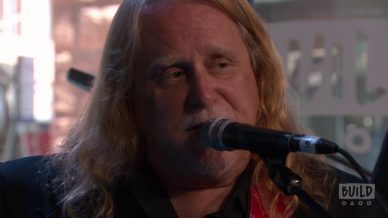