Thanks to Mike Buzzeo for the full show AUD!

ATCF will play 17 dates on it’s inaugural tour, before Chris returns back to the Chris Robinson Brotherhood. If night one was any indication of the tour ahead, this probably won’t be the last time As the Crow Flies tours.

Robinson and Relix announced a last minute webcast of the sold out show, 30 minutes of which was streamed for free on their Facebook page. Luckily, Sean Roche was also in attendance and got some great front row footage of the show.

The setlist was made up almost entirely of Crowe songs aside from classic covers like CSNY’s “Almost Cut My Hair.” Marcus King and Audley Freed make a formidable pair on the guitar. While Freed has plenty of experience with the Crowe catalogue, King has had to play catch-up. From the first show, you’ll see he’s done his homework. Check out the chills-inducing solo from King (and then the wicked follow up from Freed) on the epic Crowes tune “Wiser Time.”

Fast forward to the 15:30 mark for the beginning of the show.

I Can’t Stand the Rain

I’d Love to Change the World 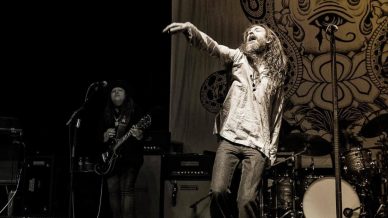 Jam Date: April 17, 2018
Featuring: As the Crow Flies
Venue: Capitol Theater
Songs: Almost Cut My Hair, By Your Side, Good Friday, Hard to Handle, Hush, I Can't Stand the Rain, I'd Love to Change the World, Jealous Again, My Morning Song, Nonfiction, Remedy, She Talks to Angels, Sting Me, Thorn in My Pride, Twice as Hard
Hey-I got something to say!