Dead and Company’s summer tour finally pulled into Boulder, CO last week. After Bobby sat-in with his good friend Jackie Greene at Red Rocks on July 4th, he rejoined Dead & Co for they band’s final two shows of the summer at Folsom Field in Boulder, CO.

Bobby, Mayer and the boys fought some fierce weather on night one that interrupted the show. The weather cleared and was beautiful for night two.

Anything that Boulder was cheated out of because of weather on night one, Dead and Company more than made up for it on night two. The boys kicked off the night with a smoking “Scar > Fire” and set two was chock full of hits including “Estimated Prophet,” “Franklin’s Tower,” “Eyes of the World,” “Althea” and “Not Fade Away.”

Bobby and the rest of the company came back out for the encore and thanked the crew for all their hard work on tour. Then Dead & Co treated Boulder to a three-song encore including “Ripple,” “Brokedown Palace” and “Playin’ in the Band Reprise.”

Thanks to Lucas Lorenz for the recording! 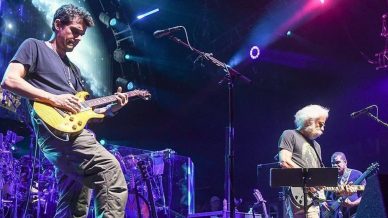 Jam Date: July 6, 2019
Featuring: Dead and Company
Venue: Folsom Field
Songs: Althea, Bird Song, Brokedown Palace, Brown Eyed Women, Days Between, Don't Ease Me In, Drums, Estimated Prophet, Eyes of The World, Fire On The Mountain, Franklin's Tower, Loser, New Speedway Boogie, Not Fade Away, Playing in the Band, Ripple, Scarlet Begonias, Space, Standing on the Moon, They Love Each Other
Hey-I got something to say!