Reeling off the terrible news of Prince passing away yesterday, I thought sharing the ultimate live performance and quite frankly, the inspiration for this site, was appropriate. I came across this Prince performance at the Rock and Roll Hall of Fame induction ceremony a few years ago and it’s safe to say that I account for at least a 1,000 of the 11,425,514 views this song has as of today.

Prince was inducted into the Rock Hall in 2004 and performed at the induction ceremony with one of his favorite artists, Tom Petty. “It was an honor to play with him,” Prince said. “‘Free Fallin” is one of my favorite songs.”

Prince is joined on stage for the Beatles’s classic “While My Guitar Weeps” by Tom Petty, Jeff Lyne, Steve Winwood and Dhani Harrison (George Harrison’s son.) The performance starts of like most all-star collaborations do-good, but void of a lot of character that a single artist or band would give the song. That is, until Prince got his turn.

As one YouTube commenter put it, this performance of the song should be renamed “While My Guitar Furiously Wails.”﻿ Prince leaves it all on the stage for this performance. Aside from his mind-blowing guitar prowess, Prince proves that he’s the ultimate entertainer-falling backward into the crowd during his guitar solo and tossing his guitar to God knows who at the end of the song.

The world will miss you, Prince. RIP. 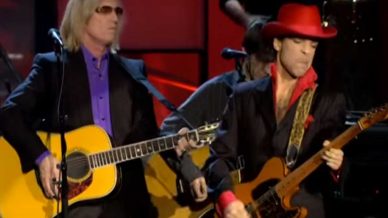