Above is a playlist featuring John Mayer’s sit-ins on “Jack Straw,” “Morning Dew,” “I Know You Rider,” “Peggy-O” and “Ripple.”

John Mayer can’t shake the Dead. Just this past weekend he was in attendance at one of the JRAD shows at the Brooklyn Bowl and ended up sitting in for the whole second set. See some of his blistering guitar solo on “Quinn the Eskimo” from that night:

Just a few days later, John trekked across the country to make a surprise sit-in with his Dead and Co partner in crime, Bob Weir. The two haven’t shared the stage since the last Dead and Company show of the summer tour in Mountianview back in July.

At the end of two sets of material from his new album and Dead classics, Bobby welcomed Mayer to the stage. Mayer sat-in for three tunes at the end of the second set and then came back out for two more during the encore. One of the highlights of the sit-in include Mayer feeling some of that summer magic on Morning Dew. At one point, you can see Steve Kimock on his knees looking on at Mayer with joy as he shreds through the solo.

Thanks to YouTubers Chris Rhine, blisstanger and Rich Saputo for all the footage!

Here is the full setlist from below thanks to blisstanger: 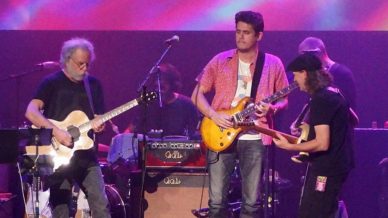