Bob Weir’s Campfire Tour has been sweet, but all too short. We have seen John Mayer sit-in, a birthday show, a JRAD & Weir collaboration and so much more.

The tour ended last night in Chicago and Bobby did not disappoint. As he has done with the other shows in this tour, he sang a few solo tunes before he welcomed Steve Kimock and the rest of the band out for the rest of the show. The second tune he sang last night was one of my favorites – “Black Throated Wind.”

Bob totally owns this song and lays it all out on the stage whenever he sings it. The stripped down, acoustic version showcases Bobby’s vocals which are sounding amazing at 69 years young.

Set 1 – Corrina (solo), Black Throated Wind (solo), Blue Mountain (solo), Darkest Hour, Only a River, Lay My Lily Down, Gallop on the Run, What the Ghost Towns Know, Most of the Time, Gonesville

Thanks to Sojahsey1 for the footage! Check out his channel for more tunes from last night. 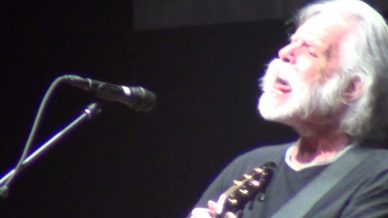