This gem comes from the second CD of The Layla Sessions: 20th Anniversary Edition and captures a set of unreleased jams between Duane Allman and Eric Clapton. Taken from the YouTube page, here is the story behind the jam:

A few uninspired days into the Layla sessions, Dowd, who was also producing for the Allmans for their album Idlewild South, invited Clapton to an Allman Brothers outdoor concert in Miami, where Clapton first heard Duane Allman play live. The Dominos were sneaked into the show with the help of Dowd and sat between the riser and fans below. At the concert, Dowd distinctly remembers:

“Duane was in the middle of a solo; he opens his eyes and looks down, does a dead stare, and stops playing. Dickey Betts is chugging along, see Duane’s stopped playing, and figures he’d better cover, that Duane must’ve broken a string or something. Then Dickey looks down, sees Eric, and turns his back. That was how they first saw each other.”

Formal introductions were made after the show. Eric invited the entire band to Criteria Studios for a jam. After the concert was over, they all came back to the studio and jammed until approximately 6:00 the next night, Dowd remembered. “They were trading licks. They were swapping guitars. They were talking shop and information and having a ball no holds barred, just admiration for each other’s technique and facility. There was no control. We turned the tapes on and they went on for 15 to 18 hours like that. You just kept the machines rolling. I went through two or three sets of engineers. It was a wonderful experience.”

Those jams can be found on the second CD of The Layla Sessions: 20th Anniversary Edition. After the all night jam Duane had hoped he would be able to sit in the studio as an observer while the Dominos recorded, but Eric would have none of that. According to Dowd, Clapton told him, “Get your guitar. We got to play.” When Duane arrived at Criteria Studios on 28 August to play on “Tell the Truth”, the sessions were lifted to a higher level.

After the jam sessions Clapton invited Allman to become the fifth and final member of the Dominos, but Allman demurred, remaining loyal to his own band.

After the recording of Layla and Other Assorted Love Songs, the group undertook a drug-riddled and vice-prone US tour that didn’t include Allman, who had returned to The Allman Brothers Band after the recording process. However, Allman did perform two shows with the group – at Curtis Hixon Hall, in Tampa, Florida, on December 1st 1970, and at the Onondaga County War Memorial in Syracuse, New York, the following night. 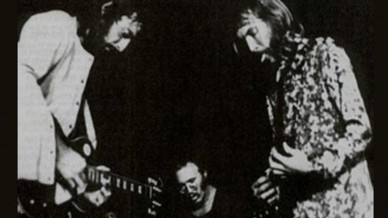