Phish finished up their three night run in Riviera Maya, Mexico this past Saturday. With these being the only three Phish dates between last year’s NYE run at MSG and their 2019 summer tour, Phish made these shows count.

While the third night didn’t have the huge bust-outs that night one did, it had one hell of a setlist.

Night two kicked off with a rare opener and night three did as well—”The Curtain With.” The first real jam of the set came with “Blaze On > Destiny Unbound.” Trey treated Mexico to a beautiful “Divided Sky” that strikes me as the perfect song for an evening on the beach.

The second set is when things really started to heat up. Highlights include “Mike’s Song > Weekapaug Groove” and then the massive “Fuego > Tweezer > Carini > Ghost” block that lead way to the new and improved way to close a show—”Say it to me S.A.N.T.O.S.”

Phans expecting a pair of songs for the encore were overjoyed to discover the party wasn’t ending anytime soon. Trey and the boys reared a 6-song encore to cap off an epic weekend.

Thanks to Ryan Stearns for the recording . 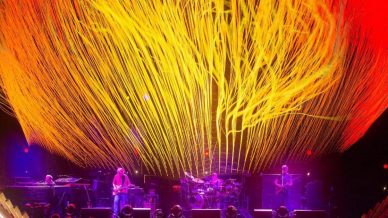