After a glorious NYE run at MSG, Phish have returned to the stage, albeit for a few nights. Their annual Phish Riviera Maya weekend kicked off last night on the gorgeous shores of Mexico’s Yucatan Peninsula.

For those not able or willing to spend the thousands of dollars to travel to Mexico for the festivities, Phish is livestreaming all three nights. Unfortunately the stream during the first set was pretty unwatchable. Fortunately, Phish streamed the entire second set and encore on YouTube for free to make up for it!

The second set (and first for that matter) was highlighted by some notable bust-outs. The first was a funky cover of Little Feat’s classic “Spanish Moon.” The last time Phish jammed on “Spanish Moon” was was back on Halloween of 2010 for a gap of 306 shows.

For the encore, Phish treated Mexico to a cover of Jimi Hendrix’s “Bold as Love.” While “Bold as Love” has been covered 82 times by Phish, the last time was during the Baker’s Dozen run in 2017.

Thanks to Phish for the stream! 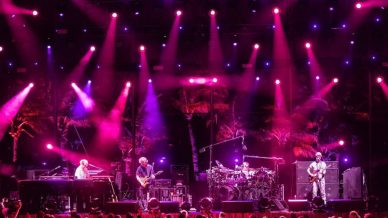