Similar to last year, Trey Anastasio is kicking off the year with a cozy, winter acoustic tour. Much to the delight of Phish and Trey phans, the acoustic tour is three times in size as it was last year, clocking in at nine shows spanning the Eastern seaboard.

The first stop on Trey’s acoustic tour was in Morristown, NJ, about 30 minutes west of NYC. The intimate set was chock full of Phish tunes ranging from tracks off their latest release, Big Boat like “Blaze On” and the ballad “Miss You,” to old classics like “Wolfman’s Brother,” “Wolfman’s Brother” and “Chalk Dust Torture.” Trey also included plenty of stories including one about doomsday preppers and pregnant cows.

Trey's solo acoustic tour kicks off tonight with a sold out show in Morristown, NJ! This poster by Dan Grzeca will be available at merch stands while they last. pic.twitter.com/dKPNrw7TXl

Thanks to Noah Bickart for the recording. 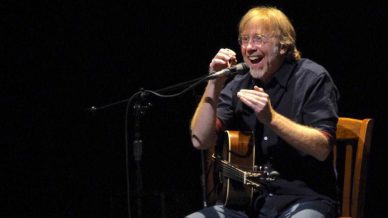