Kicking off on January 2nd, 2015, Grateful Dead bassist Phil Lesh decided to embark on a project where he and his “friends” would recreate historic shows over the Dead’s 30 year run. 2015 marked the 50th year anniversary of the Dead and of course was highlighted by a 5-show reunion of the Grateful Dead that included Phish guitarist Trey Anastasio filling in for Jerry.

Phil’s project ended last week with the recreation of a show from the summer of 1995. The June 24th show at RFK Stadium came in the middle of Dead’s final tour. The summer 1995 tour is bittersweet for Dead fans. Jerry was in rough shape and the band really didn’t sound great as a result, but it was the last memory fans have of Jerry and the Dead.

The June 24th show was forgettable on a lot of accounts except for the late Grateful Dead tunes, particularly “The Days Between” and “So Many Roads.” The “Black Muddy River” was a bust-out—first time the Dead had played it since August, 1991.

Phil was joined by guitarists Stu Allen and Grahame Lesh, keyboardists Danny Eisenberg and Scott Guberman and drummers Ezra Lipp and Alex Koford at Terrapin Crossroads to recreate the ’95 show.

Here is the setlist below

Thanks to Quinfolk for the great audio capture and daverweil for the photo. 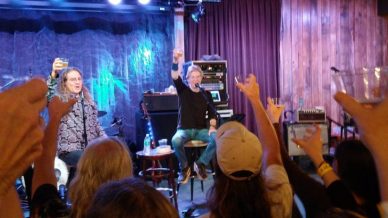