After Widespread Panic played their sets at Panic en la Playa, the party continued into the wee hours of the morning with late night sets. Similar to last year, an all-star group assembled to treat WSP fans to some late night jams. This year the group was called The Cleaners and included Eric Krasno on guitar and vocals, Marcus King on guitar and vocals, Kevin Scott on bass, Duane Trucks on drums and Deshaun “DVibes” Alexander on keyboards with special drop ins from Cyrille Neville on percussion and Leslie Mendelson on vocals. Wow.

The late night set was jam-packed with smokin’ covers including from the Allman Brothers Band’s “Dreams,” the Dead’s “Scarlet Begonias > Fire on the Mountain,” Jimi Hendrix’s “Manic Depression” and Black Sabbath’s “War Pigs” among others. This was a set not to be missed.

Even with the awesome Panic shows, Z-man named this the set of the weekend.

* With Cyrille Neville On Percussion
# With ? On Saxophone
@ With Leslie Mendelson On Vocals

Thanks to Z-Man for the phenomenal recording. 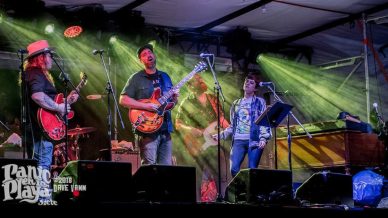