The Last Waltz Band, helmed by Warren Haynes has been honoring The Band’s final concert for the last couple of years. Warren, Lukas Nelson, John Medeski and more will travel to 12 venues throughout November. This tour captures the excitement of The Band’s historic 1976 Thanksgiving concert at the Winterland Ballroom in San Francisco which many regard as one of the greatest rock concerts of all time.

The stage had a set complete with chandeliers that recreated scene of The Band’s final concert.

At about 8:20, some guitar fuzz broke into a waltz played over the PA. The band took the stage shortly thereafter and got the night started with the classic “Up on Cripple Creek.” Medeski set the tone on the tune with funk dripping from the keys. The tune also featured some fine yodeling from Uncle Warren.

The Levee Horns joined in on the next tune, “The Shape I’m In” that featured Lukas Nelson on lead vocals.

A couple of songs later, Jamey Johnson delivered a jaw dropping Georgia on my Mind. Jamey’s soaring vocals challenged Warren to step up and deliver an equally hair-raising solo. (See video above)

New Orleans musical ambassador and percussion legend, Cyril Neville joined later in the set to lead The Last Waltz Band on a march. Cyril’s NOLA swagger and rhythms on “Down South in New Orleans” were infectious and spread to the rest of the band.

The Last Waltz Band closed out the first set with a fast-paced “King Harvest” and a “Day They Brought Old Dixie Down” that brought tears to my eyes. Lukas and Jamey on lead combined with The Levee Horns was simply stunning.

The second set was ushered in a similar way as the first, with the exception of Medeski leading us with a quick detour to the unknown. After a couple of minutes, Medeski and Terrance Higgins laid the foundation for Warren’s opening cords to “Chest Fever.” The Band classic ended in a guitar battle between Nelson and Haynes.

Another The Band classic “Ophelia” was followed up with Van Morrison’s timeless “Caravan.” The Morrison tune was made for Warren’s vocals.

Bob Margolin, who played at the original Last Waltz with Muddy Waters, too over on slide guitar for “Manish Boy.” Bob’s theatrics and slide guitar summoned the spirit great spirit of Muddy.

Warren and Bob shared a story from the original Last Waltz about a broken guitar string that resulted in Robbie Robertson stealing a guitar solo from Eric Clapton. Bob reflects that guitars now have protection to prevent that from happening and Warren quips “Protection nowadays is important.”

The set was closed out with two fan favorites, “The Weight” and “I Shall Be Released” that brought the Count Basie Theater to their feet. What a night! 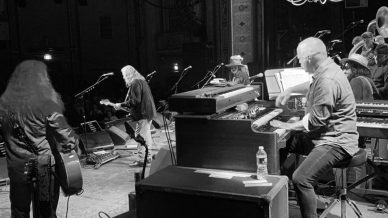