Warren Haynes took his Ashes and Dust Band across the pond this summer to tour Europe. In the wake of all the terrorism and hate happening in the world, especially in Europe, Warren opened his show at the Tollwood Festival in Germany with a solemn instrumental of John Lennon’s “Imagine.” Sadly, a week after Warren’s show, Munich would be rocked by a terrorist attack at a shopping mall.

After opening with “Imagine,” Warren rallied the band for an a cappella version of “Angel Band.” You can watch select songs of rest of the show after the opening courtesy of YouTube user bobbynoe1.

Here is the setlist thanks to setlist.fm.

Encore:
Two of a Kind, Workin’ on a Full House (Dennis Robbins cover) 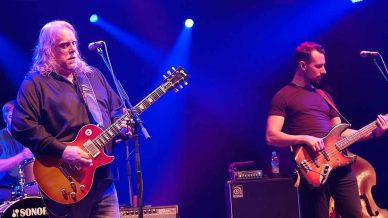 Jam Date: July 15, 2016
Featuring: The Ashes & Dust Band, Warren Haynes
Venue: Olympiapark
Songs: Angel Band, Banks Of The Deep End, Blue Sky, Imagine, Instrumental Illness, Is It Me or You, Jessica, Two of a Kind Workin' on a Full House
Hey-I got something to say!