Joe Russo’s Almost Dead is back with another installment of RAD Night in America. This week’s stream is vintage JRAD—New Years Day, 2016 at the Capitol Theatre.

After ringing in the new year in Philly, JRAD headed North to the Capitol Theatre for a New Years run. Given that this was early in JRAD’s history, the show included seven, yep seven, debuts!

^ – All First Time Played by Almost Dead: 7 Debuts total inc. Dixie Down
@ – With an Eyes of the World Tease (TH) & a Me & My Uncle Tease (Band)
# – With a Five Piece Horn Section, most from Antibalas: Jordan McLean (Trumpet), Raymond Mason (Trombone), Stuart Bogie (Sax & Clarinet), Matt Bauder (Bari Sax) & John Altieri (Tuba)
$ – With Stuart Bogie on Sax, no other members of the horn section played. With a Dancin’ In The Streets Tease Tease (Band) and a Ruben & Cerise Tease (MB)
% – With a “Walk The Dinosaur” (Was, Not Was) Tease (MB). Song included the 5 horn players leaving the stage & playing on the GA Floor as the crowd & Joe kept the NFA Beat. After the march thru the crowd, the horn section returned to stage, where some of the band rejoined them to finish the tune.
^# – The Band cover, first time played by Almost Dead. With the five piece horn section, playing the arrangements that Allen Toussaint wrote for The Band’s version from “Rock of Ages”. (The same Toussaint horn arrangements were also featured on the Last Waltz version of the song.)

Thanks to JRAD for the stream! 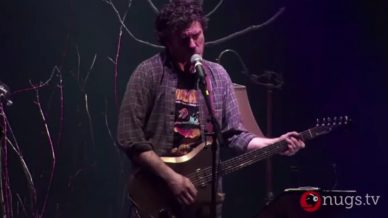 Jam Date: January 1, 2016
Featuring: Joe Russo's Almost Dead
Venue: Capitol Theatre
Songs: Box of Rain, Dancing In The Streets, Drums, Eyes of The World, Franklin's Tower, Help on the Way, I Need a Miracle, Me and My Uncle, Must Have Been The Roses, New Speedway Boogie, Not Fade Away, Row Jimmy, Sitting On Top Of The World, Slipknot!, Space, The Night They Drove Old Dixie Down
Hey-I got something to say!