We are back with another installment of the We Will Get By Streaming Tour. This time, we travel in time to 1987 to the magical Grateful Dead and Bob Dylan tour, The Dead and Dylan toured six dates throughout July. On July 26th, Dylan and the Dead rolled into Anaheim for their final stop of their tour.

For these six concerts, the Dead would kick off with a pair of sets and then be visited by Bob Dylan for the third set. Not only does this day the anniversary of the last Dylan and the Dead stop on their 1987 tour, but also the anniversary of Brent Mydland’s passing. Brent was only 37 years young when he died 1990.

Set 2
Shakedown Street, Looks Like Rain, Terrapin Station-> Drums-> Jam-> The Other One-> Stella Blue-> Throwing Stones-> Not Fade Away

Set 3
Mr. Tambourine Man, Dead Man, Maggie’s Farm, Simple Twist Of Fate, Watching The River Flow, It’s All Over Now Baby Blue, Chimes Of Freedom, Queen Jane Approximately, Stuck Inside Of Mobile With The Memphis Blues Again, Ballad Of A Thin Man, Rainy Day Women #12 And #35, Gotta Serve Somebody, All Along The Watchtower

Thanks to Charlie Miller for the recording! 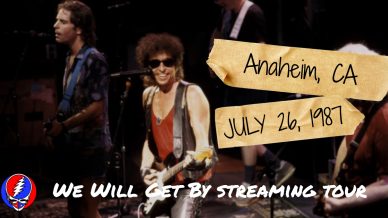