Legendary funk band WAR will be celebrating their 50th anniversary next year. While the band only has one member from the original 1969 line-up, Leroy “Lonnie” Jordan on keyboards and vocals, the current ensemble is still fighting the good fight and keeping WAR alive.

Last week, WAR traveled to one of the more unique festivals of the year, KAABOO. The festival located at the historic Del Mar Racetrack + Fairgrounds, just north of San Diego, bills itself as an “adult escape, uniquely curated to appeal to all five of your senses, with world-class music, hilarious comedy, incredible cuisine, craft libations, inspiring contemporary art, and personal indulgences.”

The festival touted an impressive and eclectic line-up including the Foo Fighters, Robert Plant, Earth, Wind & Fire among other acts. Included in the mix was the subject of Jam Buzz’s 1,000 jam—WAR. In addition to playing KAABOO, Lonnie Jordan and WAR jammed into Jam in the Van to jam on their classic tune “Slippin’ into Darkness.”

Thanks to Jam in the Van for the awesome jam (in the van!) 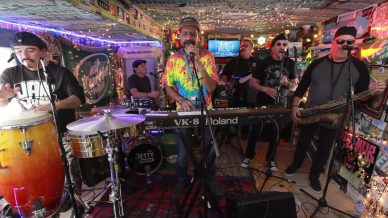 Jam Date: September 14, 2018
Featuring: War
Venue: Jam in the Van
Songs: Slippin' Into Darkness
Hey-I got something to say!