Listen to JRAD breathe new life into the Dead.

Joe Russo’s Almost Dead performed a three show run at the Brooklyn Bowl March 24-26 for Freaks Ball XVI. The show’s are all gold, but this 40 minute jam in particular grabbed me and wouldn’t let go.

Joe Russo’s Almost Dead performs, you guessed it, the music of the Grateful Dead. Their first show actually featured tunes by the Allman Brothers and Father John Misty, but I digress. To call JRAD a cover band would be criminal, but a tribute band doesn’t quite fit them either.

JRAD have taken classic Dead material and made it their own. The Help on the Way opening into this 40-minute jam to close out their first set on the 25th is a perfect example. Listen to how Stuart Bogie, Martin Perna, Eric Biondo and Ray Mason on horns put a new twist on an old favorite. The band’s momentum doesn’t break even during the slow, melodic opening guitar lick of Althea. They seamlessly transition into a spaced out, but tight The Other One to cap off the jam.

Stay tuned for more from their three-night run at the Brooklyn Bowl.

For those of you keeping score, here is the setlist from the 3-25-16 show. 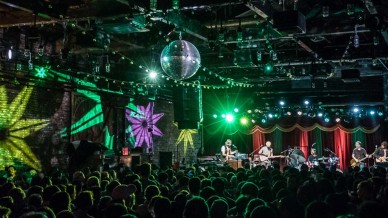 Jam Date:
Featuring: Joe Russo's Almost Dead
Venue: Brooklyn Bowl
Songs: Althea, Help on the Way, Slipknot, The Other One
Hey-I got something to say!