Get Shown the Light is a special edition of Jam Buzz’s Daily Jam featuring legendary live versions of your favorite Grateful Dead tunes on the anniversary of their concert date. Discover hidden gems, revisit old favorites and get shown the light. These tracks and more can be played on your Alexa device by saying “Alexa, open Sunshine Daydream.”

The Grateful Dead had a busy year in 1979. After arguably two of their best years, the Dead toured all four seasons and played over 70 shows in 1979. Their 5th stop of the year was their second of two nights at the Nassau Coliseum in Uniondale, NY.

Deep into the first set, the Dead unleashed a ferocious version of “Jack Straw.” Although short, Jerry’s guitar work is some of his most explosive. Some deadheads will be dissuaded by the vocals, but Jerry’s soloing saves the day.

The soundboard recording of the show is in circulation, but has a distracting hiss. This audience recording by Jim Cooper is a great alternative. 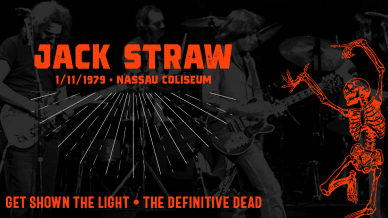